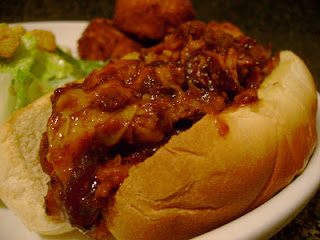 Cranberry sauce is not just for Thanksgiving. In fact, I used a jar of whole cranberry relish to make pulled pork tonight. With the leftover mac & cheese I still had from the other day, I stretched the remaining cheesy goodness to make fried mac & cheese nuggets.

The cranberry is one of only a handful of fruits native to North America. As documented by the Pilgrims, cranberries were found in abundance in Massachusetts in 1620 and rumor has it that they may have been served at the first Thanksgiving dinner, although we have no way of knowing for sure. Written recipes using cranberries date back to the 1700s and the first recorded cranberry crop in history dates back to 1816 in Dennis, Massachusetts on Cape Cod. Cranberries soon cemented their place in New England life by serving as a vital source of vitamin C for whalers and a valuable natural resource to residents.

Tonight, cranberry sauce and a touch of maple syrup sweetened my pork ribs in the Instant Pot, which was then shredded and served in a toasted bun. 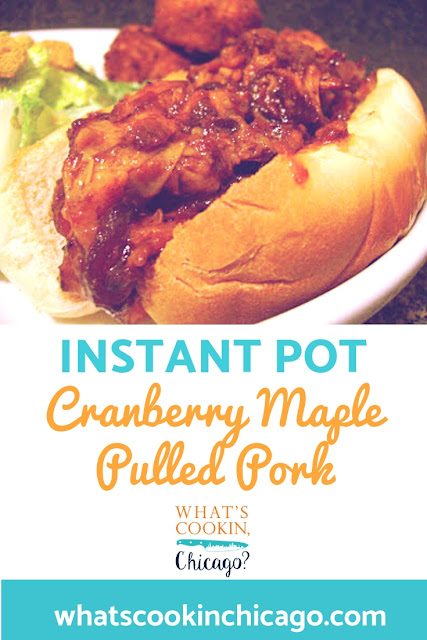 Secure the lid of the IP and ensure the valve is set to SEALING.

Press MANUAL and adjust the time to 45 minutes on HIGH pressure.

The display will reflect ON while the IP comes to pressure. Allow a few minutes for your IP to come to pressure.

Once at pressure, the display will reflect 45 (the number of minutes you initially set) and will begin to countdown to 0 minutes.

When the display reflects 15 (which is 15 minutes since the IP has beeped) all pressure should have naturally released. If not, turn the setting on top of your IP to VENTING. Doing so allows the IP to quickly release any remaining pressure (also known as QPR or QR). I use a wooden spoon to carefully turn the setting to avoid close contact with the potential steam. You may also want to turn your IP away from cabinets to allow the released steam to escape freely. The pin at the top of your IP will drop when all pressure has been released and it’s safe to open.

Remove pork and place in a bowl; shred with 2 forks and return back to IP.
Press SAUTE and let the remaining liquid come to a boil. Let it boil until it thickens up as desired.
Serve in toasty buns, over potatoes or however you’d like!
I served this on a toasted bun, ceasar salad and
fried mac & cheese nuggets.
Previous Post: « December 2018: Holiday Edition!
Next Post: Instant Pot: Beef Osso Buco »